Chained study and the discovery of relational structure [paper]

Imagine that you’ve started a new job and you’ve noticed some perplexing patterns in how your co-workers interact. For example, you observe Bill being rude to Anna, but then shortly after he is perfectly nice when interacting with Carol. What might explain why Bill acts differently in these situations?

One explanation is that Bill’s behavior reveals an underlying hierarchy (or ranking) of the kind commonly seen in social environments, whether they are formal (e.g., based on a management structure) or informal (e.g., based on popularity). Bill might be rude to Anna because he’s ranked higher in the social hierarchy, but deferential to Carol because he’s ranked lower than her. By observing differences in how people interact across different contexts, you can discover the underlying hierarchy and make sense of seemingly inconsistent behaviors.

In a new paper now out in Memory & Cognition, I examine how people acquire this kind of relational knowledge through trial and error learning. This work focuses on a more difficult version of this problem where people are unaware that an underlying hierarchy exists (compared to social situations, in which people can rely on prior knowledge about how social groups are commonly organized and interact). Past research has shown that some people nevertheless are able to discover that underlying hierarchy, and in this paper I examine the kinds of learning experiences that are most likely to facilitate that relational discovery.

To learn more, watch a talk related to this project, or take a look at the paper.

Do people change their beliefs when they see a data visualization like a scatterplot? Communicating science and making evidence-based arguments often involve data visualizations like the one below. It can be tempting to think that “the data speaks for itself”—that it paints a clear, relatively unambiguous picture about the relationship between a set of variables. But the mere presentation of statistical evidence, no matter how strong, does not guarantee that people will change their minds, particularly when they have strong preexisting beliefs that run counter to the data.1

In a new VIS 2020 paper, my colleagues and I examined how people update their beliefs about statistical relationships when viewing scatterplots. We developed some new methods for eliciting beliefs about these relationships and used computational modeling to evaluate the impact of different types of scatterplot visualizations on belief updating. This project adds to a growing number of studies that aim to better understand (and model) how people learn through interactive data visualizations, including cases where such visualizations fail to persuade.

How do people discover relational knowledge through experience? I recently presented a talk on this topic at the all-virtual 2020 Meeting of the Cognitive Science Society. See the embedded video below for an overview of the project, or the proceedings paper for more detail.

It’s well-known in the behavioral sciences that people differ in their attitude toward taking risks. Some individuals are risk-seekers who like to roll the dice, while others are risk-averse because they prefer to play it safe.

Past studies of risk attitudes have typically focused on well-defined choices in which the set of possible actions are predetermined by the researcher and the possible outcomes of each action are known. For example, a person might face a choice between:

An individual’s risk preference is thought to influence whether they will go with the safe or risky option in this kind of well-defined decision.

But many real-world choices are ill-defined, in that a set of choice options is never explicitly provided to you. Instead, you have to generate possible courses of action for yourself. Do risk preferences affect how people generate actions in ill-defined, uncertain situations, just as they affect choices between predetermined options?

This is the question behind an ongoing project in the lab (with Meagan Padro and Mitra Mostafavi) and the topic of a poster that will be presented at CogSci 2020. To learn more, click on the image below to get the PDF of the poster. If you attend CogSci swing by the (virtual) poster session on August 1, 11:00-12:40 EDT! 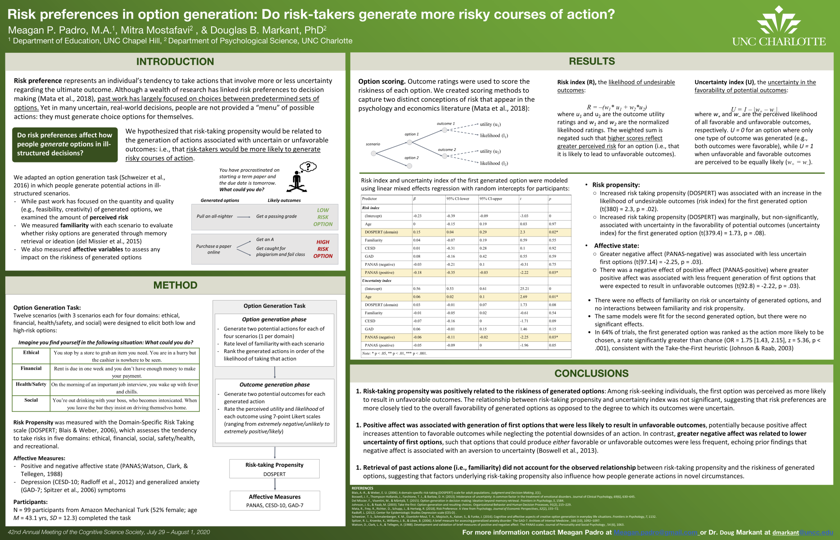 In some prior work, my colleagues and I have found that active control—being able to dictate the content or pacing of information—leads to enhanced episodic memory for materials experienced during study.1 2 Let’s say that I’m your instructor and I have a set of definitions on flashcards that I want you to learn. If I give you (the student) more control over the selection and pacing of flashcards, it’s likely that you’ll have better memory later on compared to conditions where you don’t have control.

But as an instructor, I don’t just want my students to memorize a set of independent definitions. I also want them to integrate those concepts together to form some coherent knowledge about the domain. For example, I don’t just want my research methods students to be able to define different types of validity; I also want them to be able to relate them to each other and the broader goals of experimental methods. In contrast to the first goal of forming memories of independent sets of items, it is less clear to what extent having control over learning leads to enhanced integration of study experiences into conceptual knowledge.

The project described in this poster aims to understand the effects of active control on relational knowledge formation. It uses a common relational reasoning task (transitive inference) to disentangle enhancements to memory for individual items from enhanced integrative encoding. The results so far suggest that having control over the selection of items leads to improved integrative encoding over a passive condition lacking such control. Critically, however, the benefit of active control only appears among people with higher working memory capacity. This provides another piece of evidence that the benefits of “active learning” may not be so universal, but instead depend on students having the cognitive resources to maintain and integrate disparate study experiences.

Click on the image below to get the PDF of the poster: 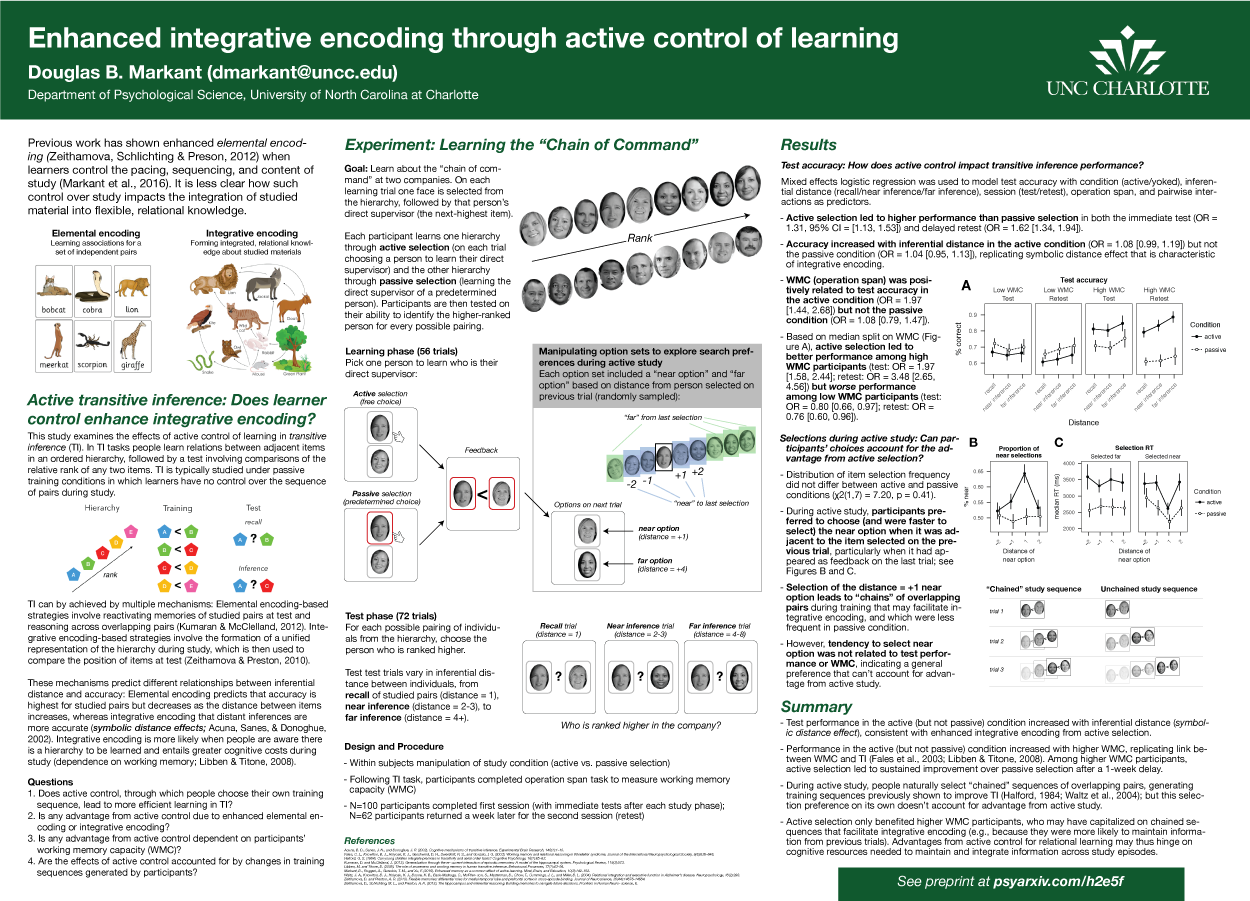