At CogSci this year I presented some new work on hypothesis generation and its role in self-directed learning (specifically, the learning of categorical rules). This project explores the idea that hypothesis generation is a bottleneck in active learning, as is suggested by a lot of work in classic cognitive tasks as well as studies from educational psychology. The results give an example of how biases in the hypothesis generation process can have a big impact on whether people can efficiently learn different kinds of rules.

For more on this project, see the paper in the proceedings and the poster below (PDF). 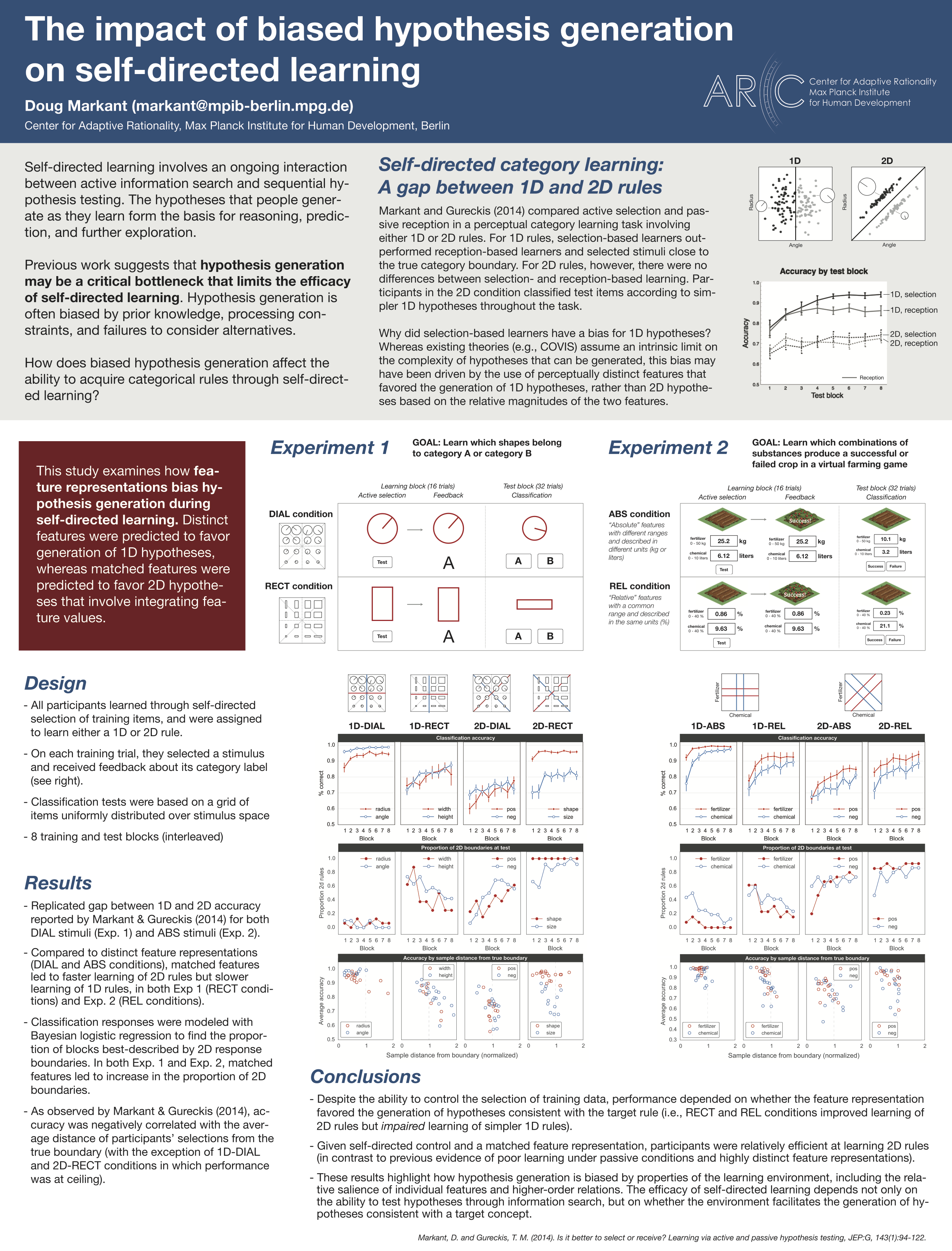 I have a new paper out in Mind, Brain, and Education, coauthored with Azzu Ruggeri, Todd Gureckis, and Fei Xu. In the paper we argue that one reason active learning improves outcomes relative to passive conditions (like lectures) is that exercising control leads to enhanced memory (in particular, episodic memory for the events experienced during learning).

In many lab-based tasks, having control over learning (e.g., controlling the selection or pacing of new information) often leads to better memory compared to yoked conditions in which such control is absent but the same information is experienced. By surveying a range of research that has employed this kind of active/yoked design in different domains, we outline how improved memory can arise from a number of different mechanisms depending on the kind of control afforded to the active learner. Thinking about real-world learning activities in terms of this basic dimension of control (which is just one part of what people typically think of as “active learning”) may help us understand when and why active learning tends to produce better outcomes than traditional instruction.

A couple of things struck me while researching the paper:

Writing the paper helped me pinpoint some of these big open questions about how memory and control interact during learning. Of course, despite our best efforts it’s inevitable that we missed some existing work that would be useful. If you know of something relevant or have any other comments about the paper, let me know!

Next month I’ll be participating in a full-day workshop at CogSci, entitled “Active learning: Cognitive development, education, and computational models.” The workshop will feature lots of terrific researchers from the CogSci community who have been thinking about active learning from many angles. Come by if you are in Philly on Wednesday!